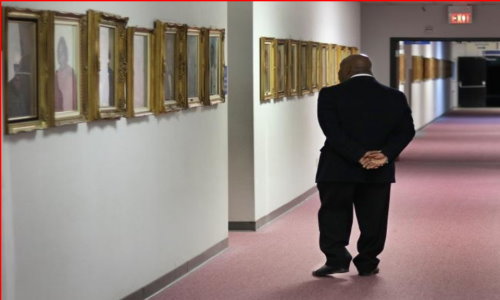 St. John Missionary Baptist Church was organized on January 12, 1919 by approximately 80 members, with Dr. W. D. Hill as the first Pastor.  The church operated under his leadership until September 1919, when he was called to pastor a church in Missouri.  After Reverend Hill’s departure, the congregation searched for a new pastor while the deacons of St. John lead the church.

In August 1920, Reverend John Wesley Johnson from St. Louis, Missouri was invited to conduct a revival for the church.  This added approximately seventy-five members to the congregation, and as a result, in September of 1920, Rev. J. W. Johnson accepted the call as pastor.

During the early days of its existence, the St. John church family was worshipping in a House.  The House was a factory type one-room building used for curing meat products located on East Main at Stiles Street, near what is now downtown Oklahoma City.  Rev. Johnson began his pastorate by moving the congregation from the Hide House to what is known as the Dr. Light Building, a more desirable location for worship, located several blocks away at Second and Geary Street.  However, with a rapidly growing congregation, Rev. Johnson began to lead the church to search for a site more suitable for permanent worship.  Four lots were purchased in the southeast area of Oklahoma City where most of the Black population resided.  However, astute observation revealed that Blacks had begun to move to the northeast area of the city at a rapid pace.  So, in March 1921, a second purchase of lots at Northeast Second and Phillips Street secured that location for a permanent place of worship.

By September of that year, a 30 X 60 foot frame building was purchased at a cost of $310 to be placed on the new site, and it became the first permanent church home for the St. John church family.

The church membership grew rapidly under Pastor Johnsonâ™s leadership, and by 1924 it was apparent that the frame building, which had been quite adequate at the time of purchase, was too small for the rapidly growing membership.  And although worship continued there under very crowded conditions for the next two years, more space was needed for this growing congregation.  A building program was launched at the Second and Phillips Street location that began with a 60 X 70 feet basement.Â  It would be used for worship until additional funds could be raised to complete the planned two story facility.  In less than two years, the basement had to be expanded because of continued congregational growth and that project was completed in 1928.

Then, in 1930 in the middle of the Great Depression the St. John church family baffled the community by launching a building program to erect a sanctuary over the basement in which they were worshipping. In 1931 Pastor Johnson became gravely ill and had to leave the state for a period of rest and recuperation right in the midst of the building project.  With the aid of Mrs. J.M.C. Amos, a strong Christian woman famous for her fundraising ability, and the strong leadership of the church’s deacons, the membership prayed, gave and worked as the church went up bit by bit. According to historical accounts, everyone contributed as best they could.  Much of the labor for construction was donated by members of the church. Some sold dinners and sandwiches, some walked to work to save bus fare in order to contribute to the building fund.  They held all night prayer meetings, and then went to work the following day.  Some say the church was built by a miracle, some say it was built by prayer. However it is described, only God with a group of committed Christians could have done such a thing at such a time.  Pastor Johnson began to regain his health and was able to resume pastoral responsibilities early in 1933, and shortly thereafter the sanctuary was completed.  The church held a grand Entrance Celebration on the first Sunday in June, 1933 thus beginning a St. John Church tradition to celebrate on this date each year.

Some years later, Pastor Johnson’s health began to wane again.  He approached the church with a request for assistance, and recommended his son in the ministry, Reverend Walter K. Jackson, Pastor of the Corinth Baptist Church in Ardmore, Oklahoma.  After Rev. Jackson prayed about the move, he and his wife, Eula Lee accepted the invitation.  In June 1945, he became the Assistant Pastor.

Pastor Johnson’s wisdom, experience and dedication to God, combined with the highly intelligent, dependable, God fearing and strong leadership qualities of Pastor Jackson made a great team for this, the Lord’s Church. Co-Pastor Jackson had graduated from Bishop College in 1937 and brought a variety of new ideas and progressive methods to the church.  He had observed a critical need in Oklahoma City and across the state for religious training of ministers and laymen.  He suggested that the church establish an institute to teach the Bible and Baptist doctrine.  He felt that the institute could serve a dual purpose as a living monument honoring and recognizing Pastor Johnson while providing a means to teach, educate and train ministers and laymen in theology.  In September 1949, the Johnson Memorial Bible Institute (JMBI) was established with Rev. Thomas D. Callendar as its Dean.  Through his able guidance, the Institute met its goal and provided training to many students across the state.

Co-Pastor Jackson realized that additional space was needed to expand the educational ministries of the church, and he proposed the addition of an educational building.Â Â  This proposal was accepted by the church and in June 1951, a ground breaking ceremony was held.Â  In one short year, the $150,000 three story building was completed and St. John held another âEntrance Celebrationâ on the first Sunday in June, 1952.

The years of Christian growth and service to God and the community continued.  Then, there was a period of sadness for our church.  In 1960, Mother Hattie Johnson became gravely ill, and on December 24, Christmas Eve, she passed.  On September 1, 1961, less than a year later, Pastor Johnson passed, also.  These events, though grievous, did not stop the church from moving forward.Â  It created courage and faithfulness to God which has carried it through other difficult times.  Now, Rev. W. K. Jackson was the Pastor of St. John, and under his strong leadership, the church continued to grow, teach and serve.

The St. John family continued to grow with the new church facility and a number of new ministries, staff and activities were added or expanded throughout the late 1970s and the 1980s, including a Drama Ministry and a Children’s Church worship service just to name a few.  A most significant addition to the St. John staff came in 1984 as Rev. Major L. Jemison came to Oklahoma City to serve as Assistant to the Pastor for Rev. Jackson before becoming Co-Pastor in 1988.  This college educated and committed servant brought his own professionalism and a wealth of new ideas for ministry to the St. John church family.  Under Pastor Jemison’s exceptional leadership, additional innovative ministries have been created or reactivated such as video and audio ministries, praise dancers, the Physical Fitness Ministry, Evangelism Ministry, Prayer and Visitation Ministry, Hospitality Committee, and the Social Services Commission.

With the growing membership, staff, ministries and activities, the church was again in need of additional space.  Therefore, in April, 1985, a $1.25 million bond drive was launched for the second phase of construction at the Kelley Avenue location.  During the second phase, the John Wesley and Hattie Johnson Manseâ was relocated and restored at our present location in honor of their memory.  Their home has been dedicated as the Heritage House and contains valued historical records, documents and memoirs of the church.

The new addition to St. John was completed in 1986, and on the first Sunday in June, 1986, another âEntrance Celebrationâ was held, this time for the W. K. Jackson Family Life Center.  This structure consisted of a new library, expanded kitchen facilities, theatrical facilities, class rooms, office space and a nursery.

Pastors Jackson and Jemison shared the desire to see that children would be provided with a safe, Christian atmosphere for learning.  With that in mind, the Church gave birth to the St. John Christian Heritage Academy in 1989; the Academy is a pre-school through sixth grade program that enjoys full-accreditation from the Oklahoma State Department of Education and an average enrollment of 120 students per year.  The theme of the academy, Stand Tall, Think Tall and Live Tall, supports the objective of developing students to be caring and self-disciplined and to demonstrate a positive moral character while achieving academic excellence.  Now in its eighteenth year of service to the Oklahoma City community, the Academy is in need of additional space and more permanent facilities.

After intensive prayer and following the leadership of the Holy Spirit, Pastor Jemison and the St. John church family embarked on a building program designed to meet that need.  The construction was financed by a $1.5 million bond issue which was launched during the month of September 2006.  This new facility (shown below) is attached to the east side of the existing educational facilities and  contains approximately 17,000 square feet of floor space with six new classrooms, administrative offices, a library, a science lecture/lab room, and a computer training facility. It also includes a new conference center with seating for approximately 300 persons and a 6,600 square foot landscaped courtyard, which is used as a secure play area for children as well as for other church activities.